In response to a major outcry about the unfairness of media coverage on non-Paris terrorist attacks Max Fisher on Vox has a great post on whether or not the media ignored the Beirut bombings. The short answer is that it didn’t. All major mainstream media covered the event. Does this mean that people care more about Parisians? 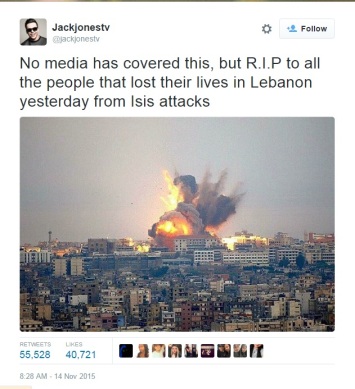 Well  yes– but not because people prefer Paris over Beirut– rather because more people are connected to Paris than Beirut, in my opinion. In some of the research I’ve done with my colleague Brian J. Bowe on how people are influenced by social media, we developed a theory about how social media influences people’s sense of reality. By reality, we are referring to what people think is going on in the world and their perception of what social issues are important, etc.

In the past, mainstream media played the biggest role in helping form people’s notions of reality. That was because the media set the agenda for what issues people should think about. It was the main source for information. Now, however, social media is playing a bigger role in becoming many people’s (especially younger people) primary source of information. That means that even though the mainstream media is still very much active, much of the information being generated out there is being filtered through one’s social network.

This doesn’t mean that social media is setting the agenda; it means that the people you are connected to on social media are setting the agenda for you. Your connections on social media are now micro agenda setters (The paper about micro agenda setters has been recommended for acceptance and hopefully will be published soon; academic articles take a long time before they make it into the public). And despite differences in older and younger generations about media consumption patterns in general (e.g., older people read more newspapers than younger), clicking on links provided by one’s network influences one’s perception of reality, regardless of whether or old or young.

What does this mean?

Well this means that your connections (and thus you) are responsible for what kind of information you are exposed to. If you have a very homogenous network, you will be exposed to less diverse information– the more diverse network you have, the more diverse information you will be exposed to. Diversity can mean a lot of things- politics, culture, ethnicity, hobbies, etc. For example, if your network is primarily the same political affiliation as you, you will be less exposed to the issues and opinions of people from different political affiliations. If the people in your network love college football (that is the case for my network) you will know more about what’s going on in college football even if you are not particularly interested yourself.

In our research we’ve also found that for international events, having someone in your network who is from that country or connected to that country brings those events more to your attention. I think that is exactly what is happening in this situation, where the Paris incident became more salient to people in the Western world because more people are connected to Paris (as a city) or Parisians than they are to people from Beirut. If people have no personal connection, they find an issue hard to care about, even if it is a darn important issue.

To give another example from our research, we found that in a college where aggressive racial crimes victimizing Black women were taking place, people who had Black friends or were Black knew much more about the details of the crimes and saw much discussion of the events in social media, while those who did not have Black friends did not know, or were only peripherally aware of these incidents, despite the fact that everyone in the college had received an email about these acts.

So again, what does this mean?

It means that it is our own fault that we were more cognizant of the happenings in Paris than the happenings in Beirut, Lebanon, etc. I know I was personally more invested because my parents are currently in Paris and I’ve been to Paris. I also have friends living in Paris, friends from France, and friends who have friends with some connection to France. All this adds up, and thus when the shootings started happening in Paris, my Facebook Newsfeed was blowing up with the incident.

At the same time, it is kind of not our fault because smaller countries or developing countries that have less connections to people outside of their country are less likely to see a global massive reaction. And in the case of Paris, I think Facebook really amplified the event to bring it more attention globally by enabling the profile-picture-changing feature that allowed people to change their profile to reflect the French flag. In some sense, because so many people globally are connected to Facebook (more people in the world are looking at Facebook than they are the New York Times) Facebook is also an agenda setter in how they design algorithms for their suggested news and how they design features to bring attention to certain causes/issues.

What can we do to become more globally conscious?

Can technology help? Yes! Companies-especially social media companies- can try to support more serendipity and more diversity through nudges in the design.