When I first heard that the Met was not having Blackface for Otello, I thought, “good for them!” But after seeing the production, I can’t help but feel confused about why painting Otello’s face Black to visually portray his ethnicity is politically incorrect– and why politics should influence the arts.  On the one hand, for those who see Otello as a love story, his race should not matter. Several years ago, I was involved in the production of Otello with the Lowell House Opera, and both of our Otellos were White men with beautiful voices; their faces did not have to be painted black to appreciate the music. However, if we were to be true to the identity of Otello as depicted in the literature (Iago tells Brabantio that ‘an old black ram/ is tupping your white ewe’ (1.1.87-8).), he is most definitely dark-skinned. Knowing that Otello is a different race from the White Desdemona also makes other elements of the story make sense, such as Otello’s insecurities about his wife, the jealousy of Iago…

In the NYT article on “Debating Blackface“, Anthony Tommasini writes:

Things become complicated, though, when racial identities are part of the story, as in “Otello.” Getting rid of Otello’s blackface was long overdue. The historical stigma of that makeup protocol is just too loaded and painful. Yet race is still an element in the tensions and resentments that drive the work. Otello sings that Desdemona has fallen in love with him despite his darkness. And the twisted Iago is driven, at least in part, by racial hatred, though the Met’s English subtitles eliminated his references to Otello as “dark” and “thick-lipped.”

Otello’s dark skin is an essential part of Otello’s story, just as being yellow-skinned is a part of who the King of Siam is, in the King and I, which I saw at the Lincoln Center recently. In this musical, the pale-skinned English governess and her White son stood out visually because they were different, and that is an essential part of the plot- to understand the East-West cultural tension. If this production were to take place with an all-Asian cast, the  production would probably use wigs and different styles of clothing to distinguish the governess and her son visually from the rest of the cast. In this particular production, although the main Asian characters were all played by Asian actors/actresses, there was one woman in the chorus who was not Asian, but blended in with the others because she wore a black wig and was dressed to look Asian. 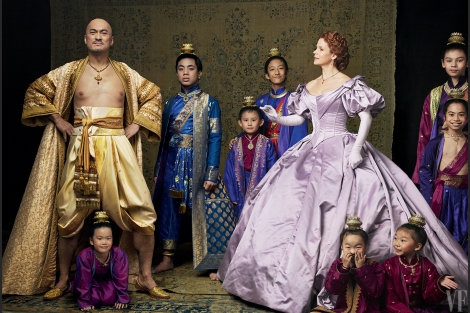 Lea Salonga (who is from the Philippines) plays a young Japanese American woman. While one could argue that these two nationalities bear little resemblance, it would have been even more confusing if the role had been played by a blond woman. There is also a love story between Sam, a young Japanese American man, and a blond White nurse. While the nurse could have technically been another non-Japanese Asian, having her be a different ethnicity really helps the viewer understand that even though both characters are American, they are subject to different circumstances because of their race.

In a few months, Kristine Opolais and Hye-kyung Hong will take on the role of Madame Butterfly at the Metropolitan Opera. Hong is Korean, which gives her the natural East-Asian look, but Opolais is Latvian. Will that stop the Met from painting the faces of these women white and giving them black wigs to visually represent a Japanese geisha? My guess is no.

I guess what I’m trying to say is that in the context of theater, changing an actor’s appearance to be a better visual representation of the character should be an artistic decision not influenced by what is politically correct or not if ethnicity actually plays an important role in the story. In the cases of Otello, King and I, and Allegiance, racial tensions are an important part of the narrative. In the cases of these particular artistic works, choosing a person who looks the part, or using makeup and clothing to make someone look the part is not being racist- it is being true to the art form. Racial tensions have been around for centuries and as a society we do not talk about it as much as we should. If we start avoiding the fact that these tensions exist in art- which should be the purest form of expression- it is a sad, cowardly society we live in.