One of my undergraduate research assistants and I had a great time at the 2015 Grace Hopper conference for women in computing. This was the first time for both of us, and we were a part of a larger group of students and faculty from NJIT who were supported by the BRAID initiative– an initiative led by the Anita Borg Institute and Harvey Mudd College, and funded by Facebook, Google, Intel, Microsoft, CRA and NSF, to increase diversity in computing. (Here’s NJIT’s news blurb on the event.)

Grace Hopper was a wonderful opportunity to meet new people, be empowered, and learn from great female tech leaders such as Sheryl Sandberg and Megan Smith. The conference also has a huge career fair, making it a must-go event for students, both graduate and undergraduate! It was the most amazing career fair I had ever seen. Although there were some sessions for younger faculty, the conference was definitely more oriented toward students. I would strongly recommend students to attend, either early on, to learn more about different fields, or later on for the career fair. 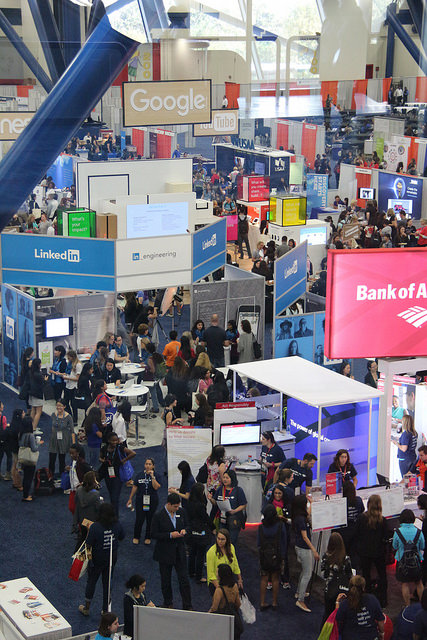 Having attended an all girls’ high school and a women’s university that have a mission to “cultivate the next generation of female leaders”, I must admit that for much of my early adult life, I did not understand why women needed the extra help and attention. I sometimes thought it was unfair, even, to have diversity quotas, because if everyone is evaluated based on their skill, why should we have to ensure that a certain percentage of them are women? In both high school and college, I was never discriminated because I was a woman, so entering a society where gender matters was a shock and disappointment.

While there are many studies about how women lack self-confidence and that they should demand respect to get it, I found that my gender-blindness made me even more vulnerable in a society (this was back in Korea) where women, while not expected to be inferior to men, are supposed to act like it, and that having confidence as a woman to “do it all” was seen very negatively. Although this experience was in Korea, I have read enough about gender experiments conducted in the United States to know that this is not a country-specific problem.

Conferences like Grace Hopper are great because women can feel empowered and be in a environment where they know they cannot be judged based on their sex. However, most of the people who attended the conference were women, and achieving the goals of a fair workplace cannot be done by women alone. While I think that Sandberg’s advice about “leaning in” can certainly apply to many- especially those who lack self-confidence- this suggests that the power lies in the hands of the victim, and that simply is not true in many, if not most corporate situations.

I found myself vehemently agreeing with some of Anne Marie Slaughter’s arguments in her new book “Unfinished Business.” Slaughter argues that there need to be structural changes in the workplace that need to happen because women can “lean in” all they want and still face career obstacles. She also emphasizes the role of caregiving at home, and how undervalued this is. I absolutely agree with this and feel like humanity could benefit so much more from proper home education and a nurturing home environment.

At the same time, I can’t help but think how naive some of her arguments on work/life balance are. She suggests that young people plan ahead for their future and that sometimes one needs to focus on career, other times on family, and that they don’t necessarily have to be at the same time. She cites examples such as Elizabeth Warren, who took some time off to take care of her kids, but is a successful professor/lawyer.

The reason I think this is naive is that for a single person who doesn’t have a family but wants one, there is never a good time to set aside one’s career and the balance cannot exist because one side is non-existant. You can want a relationship and work toward finding one but there are many elements beyond your control. I also think that there are fundamental differences between sexes because men can spend 20 years focusing on building a career and then choose to start a family later, but women do not have that option if they want to have biological children. So there is a fundamental imbalance that I can’t even imagine how we would address as a society. Of course, one could choose to take on a career that doesn’t require 80 hour workweeks, but if you want that high-profile job or inevitably have to work that much, balance is a luxury that one could desperately want but not be able to afford.