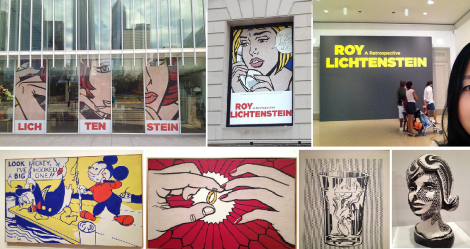 I am not a huge fan of the pop artist, but I immensely enjoyed the Roy Lichtenstein (1923-97) retrospective at the Art Institute of Chicago. I was unfamiliar with his very early and very late work, and the chronological display of this art really put the progression of his different styles into perspective. It was wonderful that various pieces from so many different museums were able to come to one place. In particular, it was interesting to see how experiments with large brushstrokes eventually turned into a pop version of a brushstroke.

The most striking realization that I had was that Lichtenstein was, for the most part, not inspired by specific people, objects, or landscape, but by other art forms. The most obvious influences are comic books and animation, but he also did a lot of “parody” art, putting his own fun spin on classic works by Picasso and Mondrian to name a couple. It seems funny almost that contemporary artists such as Shepard Fairey be criticized for “stealing” photographs to use for his artwork because for centuries, artists have continued to do so, including those in the pop art era such as Lichtenstein and Warhol.

This sculpture and the paintings in the background are all “parody” works of masterpieces.

I was surprised to see that he had painted nudes very late in his life. However, he did not base his paintings on live models, but magazines, which I thought was very funny because I also keep a big scrapbook of beautiful photoshoots from fashion magazines, which I look at when I paint.

What I loved most about the exhibit was the small room filled with sketches and pencil drawings. These are works that are hard to find via the web and make you feel closer to the artist because they have a rawness that is humanizing.

In general, I couldn’t help but feel some jealousy towards Brad, the handsome man that the girls in Lichtenstein’s paintings pine after. In the back of my head, I hear Janet from the Rocky Horror Picture Show singing “Oh Brad~” (in the song, Dammit, Janet). 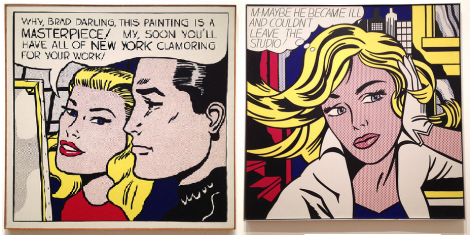