Shepard Fairey, artist of the famed red white and blue portrait of Barack Obama for the poster “Hope” is fighting back for his rights. His artwork is based on an AP photo, and AP wanted credit. I don’t know whether they are upset about not being credited in the first place, or because Fairey has profited from the artwork. A photographer myself, I can understand where AP is coming from, but clearly, Fairey’s poster is derived work, not a tweak of the original.

From the LA Times blog (which BTW didn't have credits)

This case is nothing new, but something we really have to start thinking about. It’s very similar to the case of Richard Prince, although Prince’s derivation of the original photos was, in my opinion, less creative than Fairey’s. I mean, becoming famous because you took a picture of someone else’s picture? Come on!

Warhol's Nine Jackies, taken by moi at the Met.

As I mentioned in a previous post, most contemporary artists are basing their artwork on photographs- think of Andy Warhol, Marlene Dumas… Most of their work is based on publicly-available photos, such as press photos, but with services like Flickr, artists have a huge visual pool to get their inspiration from. Now that the “default” of Creative Commons license is attributing the original author, how does one go about when creating art? It’s not like an academic paper where you can put in a footnote. Should artists write on the back of their canvas if the work was derivitave? Art falls into a weird category, because it is commercial, yet different from what we think when we think of commercial use/purpose.

It’s also very difficult when you’re trying to pin down copyrights because inspiration can come from a number of sources. How can you define which sources of inspiration are more important than others? As an amateur painter, I find traces of Gogh, Klee, Klimt, and perhaps thousands of other artists in my paintings. I am also inspired by people- the particular look in someone’s eye, the specific silhouette of someone’s pose, like Dora Maar was to Picasso. Sometimes I know that I am inspired by a particular image. Most of the time, it comes from a subconscious level, unnoticed by me until someone points it out.

I know that AP may be feeling “cheated” or want to be part of whatever money Fairey made from his poster, but I don’t think this an issue where we have to sort out things with the law. Copyright laws were created to promote the arts, not stifle them. I don’t think artists should have to say where they got their inspiration- that takes out the fun of trying to figure it out. I think every piece of art is a derivation from something that exists, the same as there being no such thing as a new idea. It also doesn’t make sense to have to wait 50 years (or whatever the timeframe is) to be able to freely use an image. Some of the best literature is derivative. Could we have Wicked without the Wizard of Oz? How many volumes of great Harry Potter fan fiction must remain in basements until JK Rowling decides to release her iron hand? Art should be kept open and free.

The beautiful thing that separates humans from animals is that we constantly inspire each other and are able to improvise. Why try to deny something that is the essence of our nature? 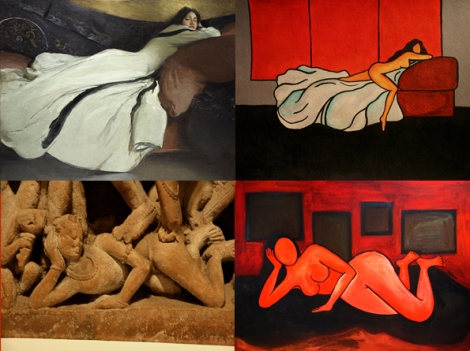 Paintings inspired by John White Alexander and an ancient Indian architecture relief. I'm exempt from copyright violations only because these images are very old.