Although there is not much scientific evidence proving this is true– some people would argue that there is none– even if video games did make children violent, I don’t understand why that is a problem, because the games that are being discussed as being problematic are those that are rated M for mature audiences. What puzzles me is that parents don’t let their children watch R-rated movies that portray blood and gore, yet are perfectly okay with buying M-rated video games for their under-aged children. (I’ve written about this before, here).

So you can imagine how frustrated I was when I saw a relative of mine post on Facebook pictures of her son opening his presents– among which included Battlefield and Call of Duty: MW3. Call of Duty:MW3 is rated M for Mature, which means it should only be played by those 17 and older. The game includes blood and gore, drug reference, violence, and “strong” language. 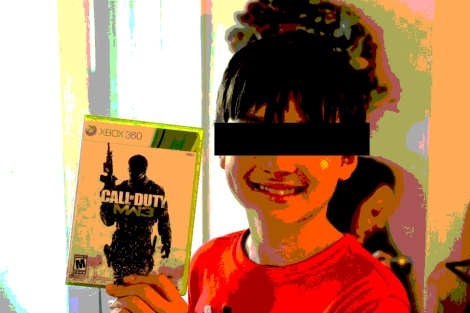 Adam (not his real name) is under 12 and a really sweet boy. His parents got him MW3 for Christmas. Most scientists would agree with me that violent video games don't make kids violent, but if there is any risk, it should be something parents think about before buying their under-age kid an M-rated video game.

Of course, it is up to the parents’ discretion as to what kind of media their children should be exposed to.  However, if we as a society are going to blame video games for spoiling our children, than we should, at the very least, discourage playing of violent video games instead of handing it to them as a gift. Don’t blame candy for making your kid diabetic if you are the one buying them the candy.

Some other view on this issue:

One response to “Are parents (not videogames) making kids violent?”