For those outside of the US who may not have seen these, here are some screenshots of websites that did a mock “censorship” of their content as a form of protest to SOPA. (Although my friends in Korea will probably be unimpressed, as DNS blocking already takes place in Korea…and we’re talking about South Korea, not North!) The ‘online strike’ was organized by non-profits such as the Electronic Frontier Foundation (EFF), creative commons (cc), and Free Press.

As much as I oppose SOPA, I can’t help but wonder how we will be able to protect intellectual property. How do you encourage a healthy practice to become a societal norm without using legislature? In some sense, digital goods are more threatened than physical goods because there is no difference between the original and the copy. No matter how many counterfeit LV bags are made in China, there are still people who want to buy the original. If this post, however, gets copied and published on another blog, the content that people see is exactly the same. Given that web publishing dates/times can also be manipulated, how would one know who originally wrote the post? What kind of digital watermarks can be developed? What can we do to encourage people to cite their sources and/or use licenses such as creative commons? How do we encourage creativity? What does it even mean to be creative?

Here are some screenshots (you can click on them to see a larger size):

Wordpress, another popular blogging service (which also hosts this blog!) 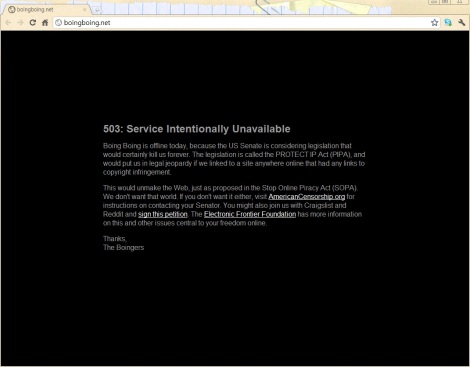 Mozilla- but only if you use the Firefox browser, which I thought was a little lame.

Flickr didn't do its entire site, but gave users the option to "black out" specific photos. You had to do it on individual photos, though, so the protest was not very visible.

Google's main page. Unfortunately, if you use a customized main page, this doesn't appear.

I was most upset about Craigslist, which I visit several times a day in hopes of finding a nice chair.

The Oatmeal is a funny comic strip. The text at the top is actually an animated gif.

Here is the animated gif, which I’m posting because the author of the site encouraged users to do so by writing “P.S. Please pirate the shit out of this animated GIF”  : 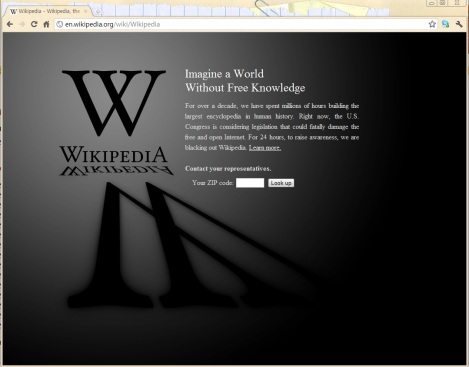 Last but not least, Wikipedia, which was the subject of most discussion among people in my Facebook Feed. Wikipedia is one of those sites you can really take for granted.

To read more on this issue, check out: