(cross-posted on Play As Life)

Let’s talk about faux-social: if you thought Zynga was being “bad” by encouraging social interactions among players, EA should be arrested for making social interactions inevitable. The game makes it extremely difficult- to a frustrating point- to play without getting “help” from other players. So you either have to pester your friends more than you want, or dish out real money to buy those “items” you need to fulfill a quest. Usually, games with microtransactions give you the option of spending a lot of time in the game to convert your time into virtual cash; or increasing your level will give you small increments of virtual cash, but Sims Social doesn’t allow any short cuts. You have to reach out to your friends or open your wallet- no middle ground.

I personally think that this is very poor game design; you want to give your players some flexibility, especially if you are using a free-to-play plus microtransactions model. I don’t know how players feel about putting up real money for “necessities” as opposed to “premium items.” But I don’t want to complain about that aspect; what I am confused about is the social interactions that I am literally forced to perform.

Interestingly enough, since the game relies on asynchronous interactions, the other player whom you perform interpersonal interactions has a vague idea of what interactions you are making your avatar do with their avatar. Indeed negative interactions will lower your friendship level, but that can also go down by not having interactions, so unless you are determined to make an enemy, they will not know whether you are performing neutral friendly interactions or amorous interactions. 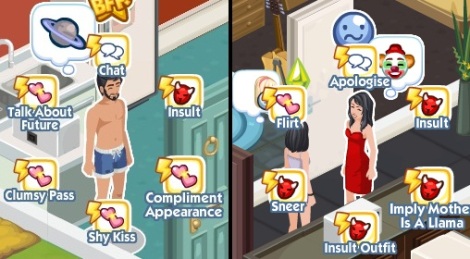 I can kiss you, or I can say your mother is a llama

Yet as the person performing these interactions, I feel somewhat “weird” about performing amorous interactions with my avatar on a friend’s avatar whom I do not have such feelings for. The game also allows homosexual relationships, so I can’t begin to tell you how confused I feel when I see my female avatar kissing another female avatar, even when the sole purpose was to get some hearts, not actually develop feelings. It almost got “complicated” recently with one of my good friends–who is married– because the game prompted me to request a romantic relationship status with his avatar. It felt wrong– but why should it, it’s only a game, right? But if it’s only a game, why did I decline to send him the request?

I declined to send this request. Why?

You’ve heard about romantic relationships develop in MMOs such as World of Warcraft, but in a sense, that is different, because relationships in MMOs develop very similarly to how they develop in real life– you spend time with a person, you do things with a person, you talk with a person. But in social network games such as Sims Online, you could essentially be playing with a complete stranger that you never have any interactions with other than exchanges within the game. In other words, you may become romantic partners just for the sake of playing the game, because that is the purpose of the game. But then, in my research, I’ve found that regardless of intention, mere reciprocal interactions of helping made strangers more inclined to help the other person in real life. That experiment was about helping. What happens when we replace helping with… slapping… or kissing? If the results my experiment can generalize to other behaviors, maybe I should stop playing this game!