Wow, it has already been two weeks since I attended Casual Connect, which was held this year in Seattle. Being in academia, this isn’t a conference that I would normally attend (and it was quite expensive to attend due to the ridiculous flight costs) but I feel that you can’t research cutting-edge technology without knowing what is going on in the industry. I know that a lot of game researchers conduct research without playing games or knowing about what goes on in the game industry, which is fine, but I feel that knowing the medium intimately helps me develop more interesting research questions that are not only theoretically interesting but realistically helpful. (I have a rant about how this is sometimes ignored in the development of serious games) 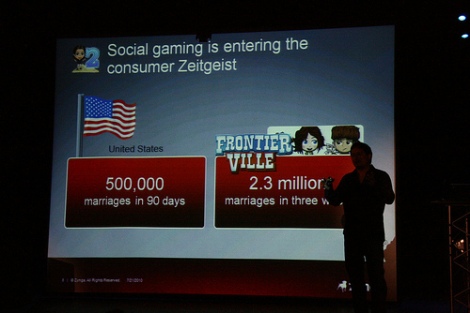 The conference was definitely a lonely experience because most of the people seemed to be developers or distributors. The interesting thing was that a lot of questions were posed in the sessions I attended (I went to the social games track) were those that I, or other people doing social games research could have answered. For instance, in talking about how players decorate their avatars, one person brought up the question of whether or not there are cultural differences. (The answer is, for certain specific types of customization, yes!) It is always fascinating and disappointing how things that are done in academia rarely make it over to industry, unless the school is extremely press-savvy. Some of the research I see published in popular press is stuff that isn’t as well-regarded in our field. (But who am I to complain- even among academia, it is so hard to share findings…so sad…)

I found out that the conference was posting all of the talks online, so I technically didn’t have to be there, but the conference seemed to be more about networking than sharing information. It was also somewhat amusing how differently people are dressed; at academic conferences, I rarely see women in stilettos.

The exhibition space was in the lobby of Bayonara Hall, the concert hall for the Seattle Symphony. I went to the PopCap booth and excitedly said, 'You should make stuffed animals for the characters in Plants vs Zombies~!" and they were like, "uh, yeah..." I guess people don't like free advice.

The interesting thing was, when talking to developers, is that a lot of them didn’t have a strong “theoretical” justification on why they developed games the way that they did. For instance, I pointed out that most of their games had a female lead character, and asked if that was a deliberate choice (I have another paper under review regarding gender representation in casual games). The companies, however, were like: “Not really, I’m sure if we had a male character, it would be equally succesful…” or “Hm, I’ve never thought about that. Maybe it’s because most of our players are women. But then wouldn’t women prefer looking at men?” Clearly, there weren’t rationales about why they did what they did. Or perhaps the designers did have a very good idea but the people in management and marketing just didn’t have a clue.

I wrote an article while I was there for Play As Life. It’s about discussion among industry on how important the platform (in the case of social network games, that would be Facebook) is for social network games. I have no doubt that Zynga, if it chooses to move away from Facebook, would still be able to roll along since it already has a huge dedicated user base. HOWEVER, if Zynga were a fledgling company, I don’t think it would be able to be successful without Facebook. As I’ve written in several academic papers (yet to be published, since the academic publishing cycling is very long) one of the key things that make social network games different from existing social games (such as MMORPGs) is that the game facilitates interaction with one’s game friends even outside of the game, and that external interaction then feeds back into the game. For instance, publishing game achievements on one’s Facebook wall has so many implications. 1) You are letting your friends know that you are playing the game. If you are alone, this doesn’t have a huge impact, but a critical mass of people who are doing this affects your friends who are getting all this game-related notices in their NewsFeed. This largely creates two different responses: people become curious about the game and then start playing, or they become appalled by the game and don’t play. Either way, you are still building the game’s reputation in terms of size.

2) You are reminded through the notices that someone needs help or has accomplished something. This elicits feedback and the interaction leads to other forms of interaction, both inside the game and outside. One paper (currently under review) that I have discusses how people maintain and even enhance relationships with existing acquaintances through Facebook games. In these cases, the games played an important role in facilitating communication.