Loved loved loved Susan Phillpsz’ show “part file score” at the Berlin Contemporary Arts Museum! Here is the description of the exhibit on the museum website:

The Berlin based Scottish artist Susan Philipsz (born 1965) has created a new sound installation for the Historic Hall . The work refers to the former function of the building of the museum’s building as a train station and to the architectural structure of the hall with its 24 pillars. The artist draws a parallel between the train station as a place of departure and arrival, of separation and return, and the moved life of the composer Hanns Eisler (1898-1962). Like his teacher Arnold Schönberg, Eisler emigrated to the US in the 1930s but had to leave the country in 1948 due to his pro-communist convictions. In the 1920s and 1950s he lived in Berlin. Although he explored the twelve-tone technique developed by Schönberg, he also became interested in popular genres such as theater or film music as a result of his socially engaged concept of art.

Based on three film music compositions by Eisler, Philipsz has developed a 24-channel sound installation. Recorded individually by live musicians in the studio, each tone is played separately on one of 24 loudspeakers installed in the hall. Through this acoustic work and 12 prints, in which pages from musical scores by Eisler are overlaid with pages from his FBI file, Philipsz attempts to convey Eisler’s aesthetic of “displaced form” while touching on themes such as life’s journey and the experience of surveillance, separation and displacement.

Her work was installed in the center of the museum, which used to be an old train station. The artwork was lined along the walls, and the music was playing from multiple speakers that were lined along the archways. The unique thing was that each speaker was playing a different tone so that as you walk down the hall, you are hit from different angles with different sounds. The experience is truly amazing. 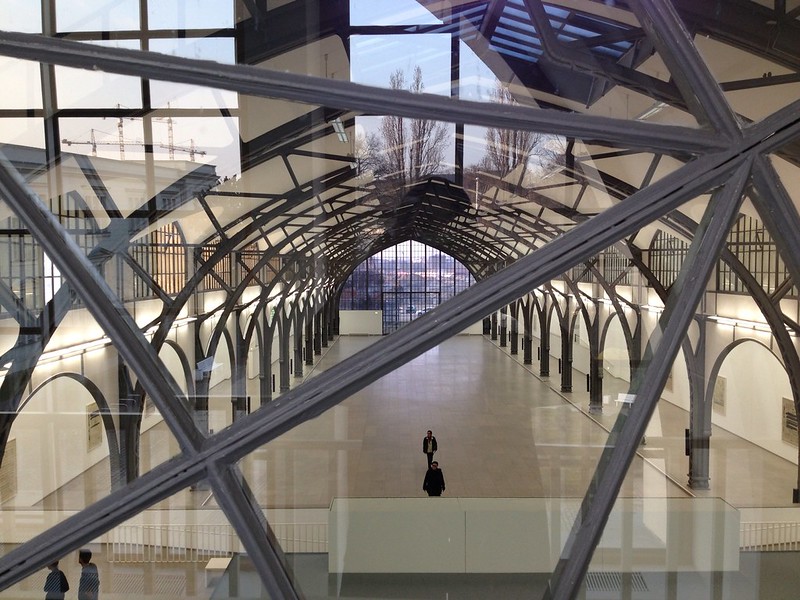 Here is a great interview that she did describing the installation