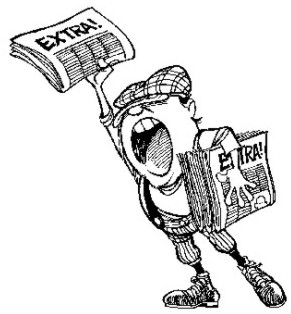 The OJR posted an article that is by far the stupidest argument I’ve ever seen on why journalism is bound to fail. The gist of the argument is that people never paid for news, thus people will not pay for news. I believe only the former is correct, agreeing with Rupert Murdoch that people will be inclined to pay for quality information. I also believe that news and journalism are different, and journalists should have some kind of bar or authorization process like attorneys and doctors, but that is another story. The reasoning that precedent predicts the future is a weak one because paradigms shift. For instance, a few years ago, the western world was skeptical about virtual goods. “Why would anyone want to pay to get something that’s not even real?” I remember one guy asking at the Virtual Worlds Conference a couple years ago. But lo and behold, it’s happening now. But to get back to my point…

So you ask, why aren’t people paying now for news? My answer is: duh, because they don’t have to. If it’s free on the Internet, you would have to be pretty darn stupid to pay for it. (Other reasons other than stupidity could be that you are full of yourself, have eye disorders and are unable to look at a monitor, or have some kind of paper fetish…). There is far too much information and much of it is the same. Newspapers initially died (and this was before the Internet came along and fanned the flames) when you couldn’t tell a NYT article from a Washington Post article. Think of the basic supply, demand, and cost graphs used in marketing. Excess of supply always results in low costs. Newspapers failed not because the industry solely relied on advertising revenues, but because they were ignorant of the exponential rising curve of supply.

We should be asking ourselves: do we really need to pay people to cover things a zillion other people are writing about? Maybe we should let the wires cover the hard news and focus on features. Maybe newspapers and broadcasting companies should merge. Fact of the matter is, there are too many reporters and god knows who is reliable. Amid all this cr** content, maybe it’s okay to let some newspapers die. Maybe it’s okay to let all newspapers die. It’s like when the walkman or phonograph died. That didn’t stop us from listening to music. If anything, we’re listening to more music than ever. Newspaper consumption does not equal news consumption.

Secondly, (and I’ve also talked about this before) is that it’s all about the convenience of financial transactions. Which is why people spend money on iPhone apps, or buy the NYT on the Kindle. People are willing to pay for content as long as it’s super-easy. So this changes the questions we should be asking. How do we make online payment easier? Adding everything to your mobile phone bill could be one example, like they do in Korea.

Thirdly, make it attractive. Visually. People are willing to pay for pretty stuff. Why would I subscribe to Wired when I can read all of its articles online? Because it’s aesthetically pleasing (and I don’t have a computer in my bathroom– at least, not yet). News is a product and I can’t believe how some ‘vendors’ (I dare not even categorize them as newspapers) think they can get away with selling an ugly product.

So, what happens with local news? Well, I’ve proposed before that hyperlocal news can work if it really engages its local readers. Really crappy “local” magazines are still running because people buy them for $5 on a quarterly or biannual basis for a copy, even if they have no special content. Why wouldn’t they pay $10 or $20 a year for a good quality local newspaper (sans the paper)? My hyperlocal news model involves two editors, a bunch of freelancers, and “community reporters.” Note that I say hyper local news– not newspaper! As much as I love paper– the grains, the weight, the colors– trees are a valuable resource and we should be cherishing them more for semi-permanent, beautiful things like scrapbooks and cards instead of throwing them out everyday and letting our dogs pee on them (one of the greater reasons my parents continued to subscribe to a physical paper was because the paper could be “recycled” for our house puppy).

To make a long rant short, my points are: 1) newspapers may die, but news will not. 2) People will be willing to pay if there is quality content with limited availability.3) Make it visually attractive (The pretty girl will always get more dates than the ugly one) and finally, the newspaper industry and the news industry are NOT the same, as journalism and news reporting is NOT the same.

2 responses to “Newspapers won’t die, but some should”