What is it about imaginary worlds, fairy tales, and fantasy that excite us? While escaping reality through fiction has been one of the driving forces of popular media content- whether that be books, movies, or social media- I’ve been noticing that lately there is a lot more remixing and reinterpretation of stories. Here are some examples:

This television series mixes fictional characters from different sources (Grimm’s fairy tales, Disney movies, classic works of fiction, etc.) This series actually does a very good job of integrating different fairy tales- not just as a collage, but as reinterpretation. My favorite episode so far was one of Red Riding Hood- (spoiler alert). While the original story was about Red being eaten up by the wolf, in this episode, Red is a werewolf, although she does not discover until the end of the episode Her grandmother makes her wear a red hood, which prevents her from turning into a wolf- explaining why Red wore a red hood (something that was curious yet unexplained in the original fairy tale). There is also a modern-day component to the story, in which we see a glimpse of what that character would have been had he/she been born today. In the case of Red, she is a hot waitress at a diner. 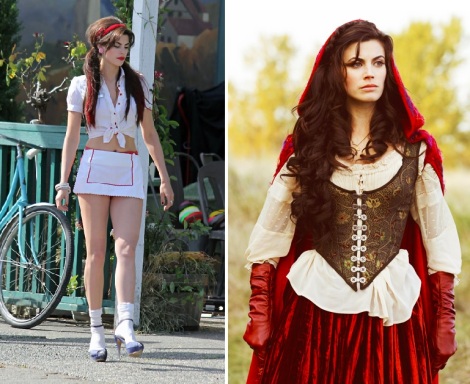 This new book by Tim Manley is a raunchy reinterpretation of things that fairy tale characters would post on social media. Didn’t find it particularly inspiring, but makes for a good “bathroom read.”

This TV series is about a descendant of the Grimm brothers, who is able to “see” certain people who are monsters, or creatures called wesen. The series is very clever about introducing a new type of monster every week and often tying it with historical figures.

4. Once Upon a Time in Wonderland (TV series)

This is a spin-off television series from Once Upon a Time, where Alice (from Alice in Wonderland) is the main character. Unfortunately, it is not as good as Once Upon a Time, and at least until now, slaps together characters from different stories in a very forced manner and the characters are not very well-developed. A great upside to this series is that what it lacks in narrative and character development it makes up for in the Red Queen’s fashion.

Marks and Spencer has a beautiful product placement-style ad that combines Alice in Wonderland, Arabian Nights, Red Riding Hood,  Hansel & Gretel, and Wizard of Oz. The advertisement seamlessly weaves together key motifs of these fairy tales and manages to do a great job of product placement at the same time.

The story starts off in a city, with the female protagonist (whom I will refer to as Alice) running after her white dog (instead of white rabbit) and falling into a manhole. 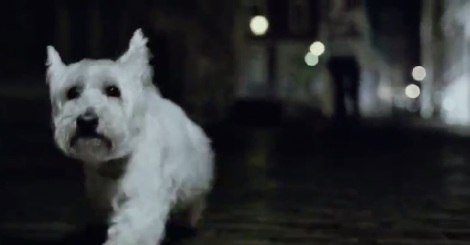 While Alice falls into a manhole, her clothes change. You see a glimpse of lingerie, and various home goods are included in her fall 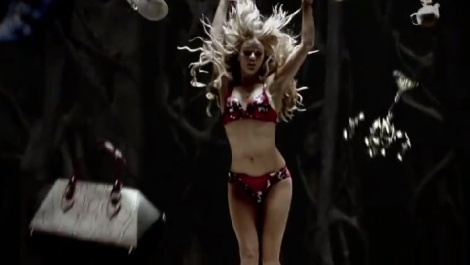 The Mad Hatter’s tea table also features things from  M&S dinnerware/serveware. The guests hold purses/clutches, one of which Alice steals: 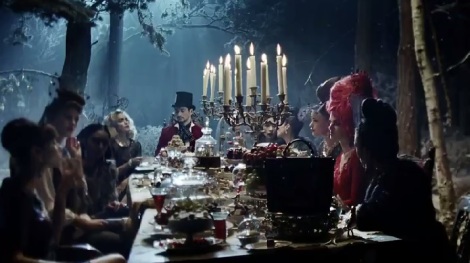 There is also a great contemporary take on Dorothy, cowardly lion, scarecrow, and tin man walking down the yellow brick road: