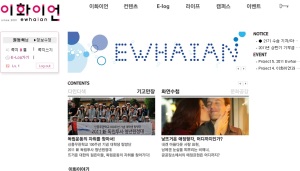 The latest version of the Ewhaian website. Nothing fancy, but the site attracts several thousand people each day.

This year marks the 10th anniversary of Ewhaian.com, a social network site I co-founded with my friends for students of Ewha Women’s University in South Korea. I’m writing this post because I think I have a lot of insights for schools or companies planning to develop social network sites for colleges. For example, the Gates Foundation is funding Inigral, a company that develops SNS platforms for colleges (see here for more info).

Do SNSs help keep students in school? My intuitiveanswer is Yes! Students have talked about how Ewhaian helped them find friends, share their worries with others and find support groups, and build a stronger sense of identity with the community. But this yes is conditional. You can’t just set up a social network site and expect that it will succeed. Having a virtual space is not enough; the infrastructure is the prerequisite.

The interesting thing in the case of Ewhaian, was that 10 years ago, the university spent two years and almost a million dollars (exact amount I’m unsure, but it was huge) hiring a company to design and set up a social network site for the university. This site (Ewhain.net) was launched within days of our site. It had a superior, sophisticated design and far more features. However, to date, the site cannot compare with Ewhaian in terms of reputation, engagement and traffic. Soon enough, university administrators were visiting our site to “monitor” student interests and activities.

In its essence, the school’s site had almost the same features as ours- yet why was ours so successful?

1. User-governance / autonomy
We stayed true to Lincoln’s vision in the Gettysburg address: “a government of the people, by the people, for the people.” We created a sustainable administrative structure, similar to that seen in newsrooms or fraternities, where the administrators are volunteers from the users. After a “rookie” year, they become senior staff and in charge of recruiting/training new recruits. Thus the spirit and ideals of the community are passed on to a new generation every year, and within the administrative circle, we have a range of students who are in varying states of academic completion.

The sense of user-governance is also utilized to weed out “bad” or “inappropriate” posts. We quickly learned that we would not be able to monitor all the content on the site. We thus incorporated a flagging system such that 5 or more flags would be reported to the admin. We are also very transparent about the money we are earning through banner ads or donations, and provide a semi-annual report of our spendings.

2. Online- offline engagement
A major offline event each semester and smaller, weekly/monthly events that take place online and offline help get users involved. The seamless approach to online/offline is important. For example, posting something online will earn users tickets to see a movie. If we coordinate with a business (e.g., a cosmetics company) to hand out free samples, users will be encouraged to write subsequent online reviews. It is important to make the students feel like the site is more than a virtual presence. Coordinating with and getting sponsorship from local businesses was an important part of these events. However, one must be careful to make sure the businesses are sponsoring the event and not the other way around.

3. Building a sense of community, branding
One of the reasons my friends and I created this site was because we wanted to connect more with other people in our school but didn’t know how. Especially in our first year, we felt like we didn’t really belong. Since the first year is mostly filled with elective courses, you can attend classes with hundreds of students and feel like you’re drifting to and from campus with no sense of identity.

To help freshmen get integrated into the college experience as quickly as possible, one of the most important events is the day of freshman orientation, where we pass out a bunch of free stuff (sponsored by local businesses) with a sticker of the site name. It’s basically saying ‘you are part of us’. This feeling of community is continuously enforced through online/offline events. One of my favorites is the “ice cream event” where we get an alum or senior student to donate $30-40 and buy one class ice cream on a hot day, surprising them at the end of class with a “someone on Ewhaian cares about you” message. It’s only a small number of people, but word-of-mouth is amazing, and more importantly,  students get that sense of belonging.

This was especially important for us very early on. We were renting servers, and what with our traffic, the bill was several thousand dollars a month. We were running out of money. That’s when we turned to our users, explaining our situation, and asked them to donate so that we could buy our servers. $1 doesn’t seem like much, but if you have tens of thousands of users, that adds up. We were able to successfully purchase several servers; now, we only pay a monthly hosting fee, which only a couple hundred dollars.

4.  Protecting privacy
One of the most popular sections on the site is the anonymous “gossip” forum. This forum is popular because everyone likes to gossip, and with several thousand concurrent users, you can be sure to get an immediate response if you post something. Also, students didn’t want to post about sensitive topics on a forum that was hosted by the university. Although the university’s SNS uses pseudonyms, it retains the right to trace posts back to the students. We don’t do that; and though the university has requested on several occasions for us to reveal the identity of certain users, we never gave up that information.

5. Keeping it separate from other social network sites
I’m sure some people will disagree with me, but I think one of the key factors for success was that this site was separate from other social network sites. Facebook did not exist at this time, but in Korea there was a popular SNS called Cyworld. We could have easily made this a community within Cyworld or some other popular Internet portal site, but we didn’t.

Keeping the site separate helps users avoid awkward “context collapse” issues because users understand that Ewhaian caters to a very specific user.  The university is such a specific context Having an independent site is also important in giving a sense of autonomy, community, and privacy protection (as mentioned in 1,3,4).