Lie to Me: killer app

This episode is about the investigation of a murder of a young woman who was one of the three co-founders of SeekOut, a social network site. The main suspects are the other billionaire co-founders, one of which has a striking similarity to Zuckerberg in terms of appearance (his name is Zach- how many names begin with a Z for this to be a coincidence?). This character is confronted by Cal (the protagonist who engages in so-called “scientific” lie detection) as being a lonely control freak who creates a social network site because he is unable to have genuine social relationships in the real world. Ouch.

The co-founder of SeekOut (far left) is confronted by the lie detecting team.

Bones: The Body in the Bag

In this episode of Bones, Dr. Swedes uses Facebook to look for potential suspects. He says Facebook is a “great profiling tool” and points to the girl’s photo-posting patterns to show “narcissism” and message patterns to show her superficial relationship with her friends. I wonder if the writers of this episode were familiar at all with the wealth of studies (many of them in the journal of Cyberpsychology, Behavior, and Social Networking) that show correlations between psychological variables and Facebook use. It was interesting how the show had a mock Facebook profile page that was similar enough that it looked like Facebook but really wasn’t. Facebook’s terms of service actually do not allow people to make fake profiles (although I’m sure a lot of people do anyway) so it was good that they avoided that legal hurdle.

Of course, the girl identified as a suspect through this Facebook profiling turned out not to be the killer. In fact, Facebook only misled the investigators from the true suspect, but still, it was interesting. I suppose the moral of the story is, someone planning murder is probably not going to be stupid enough to leave public evidence on someone’s Facebook wall. 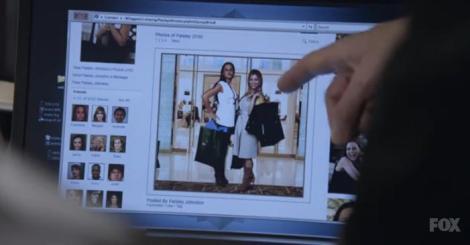 Dr. Wohn is an assistant professor at NJIT and director of the Social Interaction Lab (socialinteractionlab.com). Her research is in the area of Human Computer Interaction (HCI) where she studies the role of algorithms and social interactions in livestreaming, esports, gaming, and social media.