My HLS partner Andy and I spent almost two and a half hours together exploring SL and talking alone and with other students. Since it was meant to be a tour as well as a kind of introductory/explanatory session, the first hour was mostly spend explaining technical functions of SL such as currency, teleporting, creating landmarks, searching for new places, and so forth.

Most of the explaining took place at Midnight City, because Andy said that he would like to visit an urban area first. He seemed to be either a very shy personality not knowing much about SL to ask any questions, because he seemed at a kind of loss as to what we had to do. He was not overly enthusiastic, nor reluctant to take the tour, very polite, but with a hint of being cynical at the vagueness of the assignment.We first sat on the bench in front the central fountain as I explained the main functions.

“You can search for your new places by clicking on the ‘popular places’ tab, but most of them are clubs are other sex-related locations,” I said.”That’s the Internet,” he said. He seemed to be harboring some very negative views on the Internet, as if it were a filthy place- of course, he did not say so, but numerous times, we would be talking about some negative feature and he would say, “Well, that’s the Internet.” Those continuous comments made me indignant, for I spend much time on the Internet, and a lot of it (at least in my view) is pretty much productive and mentally healthy, such as writing in this blog (hah). Perhaps he had some bad experience in cyberworld in the past. At any rate, it would help if he could at least pretend to be a little more interested. I felt like a really bad tour guide.

Since he did not seem so eager to learn all the technical functions available in SL or in buying clothes, scripting, and so forth, we teleported to the Lost Gardens of Apollo. Sitting yoga meditation-style on a more comfortable cushion, we had some conversation on what we thought about the class and briefly about ourselves. I was able to know a little more about him, but it still felt very formal, very polite. I know it hard to “melt” a person down in an hour, but we had this huge bonfire crackling in front of us. Obviously, Andy did not feel it. 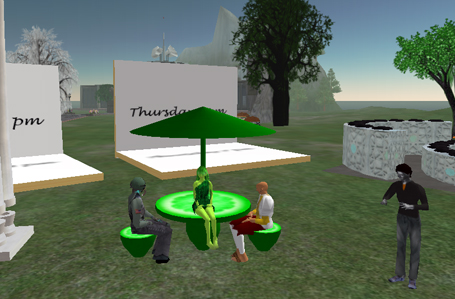 Shortly after 11, we went back to Berkman, where we found several classmates exchanging comments on our recent tours. After a lot of introducing and small talk, we discovered that two groups had gone to Aura Lily and been given tours by the owner. Andy and I were curious, and decided to check it out together. 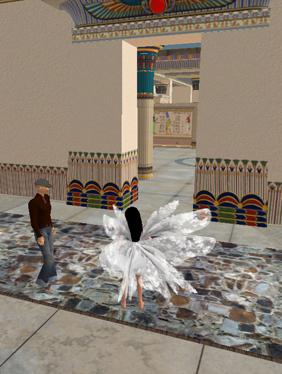 It was strange. Was it because “official” homework time was over? Andy didn’t seem as locked up as he was before.When we arrived, the owner was nowhere in sight, but we admired the architecture. I also took a snapshot of Andy posing in the Pharaoh’s chair.

We also tried some of the mature script contents that were inside the Egyptian villa, just for curiosity’s sake. We were disappointed in the majority of the scripts for adult activities.

Outside of the villa on the beach, we found a small cottage, filled with different scripts. Most of them were sex-related (again Andy attributed it to the Internet) but we did find a lovely script for ballroom dancing.

“I’m good even without my dancing shoes,” Andy said. “I’m not even wearing shoes,” I said. 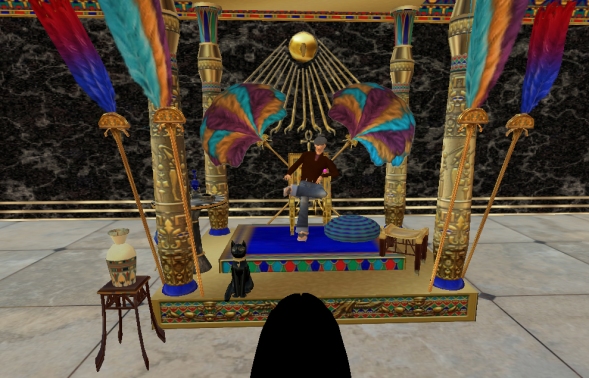 Trying out some of the adult scripts, we both talked about how we didn’t see the point of trying to have sex in SL. In particular, there was this truck, equipped with various poses. Unaccustomed to the scripts, we clicked on the wrong 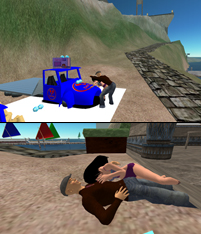 ones and ended up with Andy in the lady’s position. Oops. Even when we finally got it right, it was anything but satisfying. If anything, it was actually frustrating and funny. One script involved lying down with my head tucked into Andy’s shoulder. Unfortunately, the maker of the script had not considered that the avatars’ legs would be stuck beneath the deck. Maybe we didn’t feel enamoured because we weren’t in love, but if this was bad for someone as imaginative as me, I don’t understand why so many people enjoy it. On the other hand, perhaps it is because the regular Joe requires more visual stimulation while someone like me is rather turned off by unreal images.
Sadly, I had to break off our exploring to go to work and I left Andy flying off into some other direction to explore. By the time we parted, he seemed to be more interested in SL than when we started out. The tour had not been in vain.