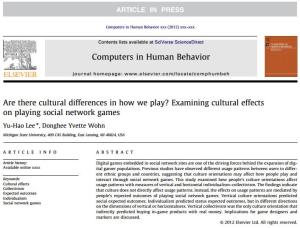 My colleague Yu-Hao and I have a new article out in Computers in Human Behavior about how cultural orientation affects people’s motivations to play social network games and how they play social network games (e.g., what they are doing in the game). One of the reasons that we did this study was because in our previous study, we found some very interesting differences in playing patterns between Asians and Whites. We also noticed that a lot of the literature looks at different nationalities and different patterns of play, but we didn’t like the idea of a race or nationality as being a good theoretical explanation for why people play differently.

We found that culture plays a very small but significant role in explaining why people play social network games and how they play. People’s patterns of game play were mediated by their motivations/expectations.

One of the most interesting findings from a non-academic perspective was that of people who were vertical collectivists. This was the only cultural orientation group that indirectly predicted spending real money to buy virtual goods, which was fueled by a motivation to seek social expected outcomes. So this can be interpreted in the sense that people buying virtual items were doing so in relation to their social activity. This finding was very consistent with research that I’ve done analyzing actual purchasing behavior of users in a social game, where I found in the server-level data that people who spent more money were also engaging in more social activities, such as exchanging goods and messaging. This may explain why the free-to-play business model of games that rely on microtransactions of small virtual goods works in East Asian countries such as Korea,  and Taiwan, as these countries have been categorized in prior research as being more vertically collectivist on a national level. Although there are national-level trends, individuals can have different cultural orientations depending on their personality, social role, community norms, etc. From a business perspective identifying and targeting those people who have vertical collectivist tendencies may be a good way to earn money.