Those in the U.S. may not know it, but lettered T-shirts are very much a part of American culture. Usually they’re more of a political or social statement than a fashion statement, but that has been changing a lot, now that people interested in fashion want to make a statement, but don’t want to be fashionably incorrect. 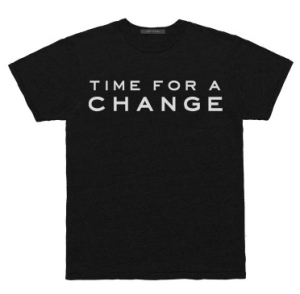 Marc Jacobs has come up with a minimalist design black T-shirt for Barack Obama. The $18 T-shirt is probably the most inexpensive in the Marc Jacobs collection and is a limited edition.

I must say I was somewhat disappointed by the design, which clearly doesn’t reflect being a Marc Jacobs design at all. I suppose Marc was focusing more on making the public gesture of supporting his candidate rather than thinking of himself as a clothing designer.

For T-shirt design has become something so common that the market is exploding with a broad range of political T-shirts– ranging from the offensive, to funny, to chic.

Undoubtedly some people are making money out of selling T-shirts, regardless of their political orientation. Cafepress and Zazzle, for instance, are websites where you can choose a T-shirt and upload your design; the websites share the profits you make (if anyone besides you buys the T-shirt).

These sites are great to look at when perusing for anti T-shirts, because you can find some very offensive, yet clever ideas that people have come up with. (Speaking of offensive, the site MetroSpy has a shopping section for Republican fans that is clearly meant to annoy liberals.)

Then there are people who have even bought domain names to independently sell their products. Sexy Obama Shirts is a site for black shirts studded with rhinestones. The shirts aren’t exactly sexy– flashy would be a better word– but the bling definitely appeals to clientele who would not be interested in wearing a Hanes box T-shirt.

For these vendors, money trumps political stance. The site Obama Shirts, for instance, has a small banner ad that endorses Obama, but states in its terms that it is an “independently owned company” and that “Barack Obama for president receives no proceeds from the sale of the merchandise.”

On a somewhat unrelated note, the most amusing T-shirt designs are those about Sarah Palin. Whether you like her or not, these T-shirts are just fun to look at. On yet another unrelated not, I must credit the Obama campaign for realizing how important T-shirts are and hosting a T-shirt competition.

One response to “T-shirts and Politics”