I went into Second Life to find the killer from the Oct. 24 episode of CSI:NY. The episode was quite interesting, although it made Second Life seemed way cooler than it really was. (They also used some fancy equipment to maneuver within SL instead of a keyboard and mouse, so that it looked like the experience was far more immersive.)

In the episode, the killer uses the avatar of a woman (who is some kind of cyber star in SL) to find people he/she wants to kill. The investigators have no idea what the killer looks like, but know that he/she is dressing up like the avatar.

The CSI site in Second Life isn’t really about the episode, but lets people who are interested in solving murder mysteries go into Second Life and take a look at some mock murder scenes and poke around for clues. It’s sort of like playing the computer game CSI but in a MMO environment. (Of course, the graphics or game elements in SL CSI are nowhere close to the computer game version)

I met a guy who also happened to be on scene and we examined the scene together, trying to deduce what had happened. “The left footprint is slightly wider than the right. Maybe the killer has a limp,” he said. 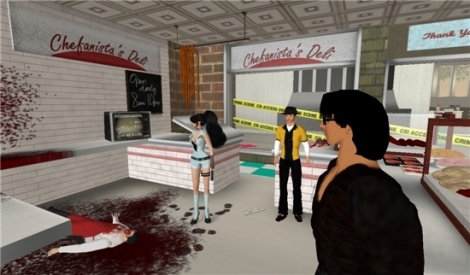