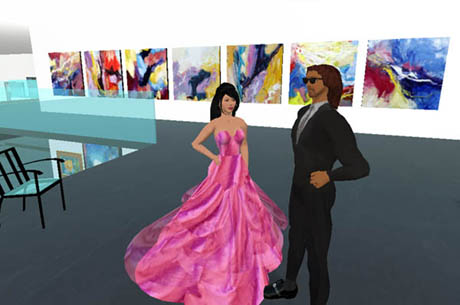 I had the pleasure of meeting the Dutch painter Carlo Pimpernel at a special exhibition held at the Kanno Gallery. This special exhibit took up the entire second floor and was composed mainly of abstract works and landscapes. Carlo was present in an SL avatar, and I was lucky to discuss with him on several of his paintings. I liked his abstracts better than his landscapes, which were mainly of Tuscane, Italy. The landscapes were too loud, and too reminiscent of van Gogh, although the bold colors and powerful brush strokes were apparently Carlo’s style. 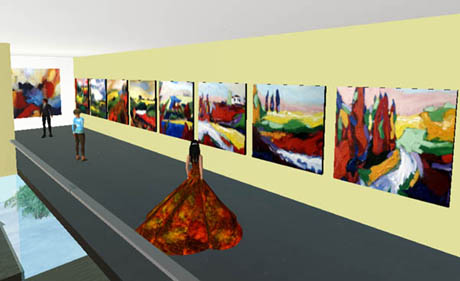 I asked Carlo why he chose to host an exhibition in SL- he said that he wanted more people to see his work, although he admitted that the paintings were much “better” in RL. I certainly agreed with the latter. Although I could sense to a certain extent what the paintings looked like, I could not grasp the texture of the canvas or the actual three-dimensional feel of the paint. It is one thing to be looking at artwork on the Web and another to be looking at it in RL. It is something the Internet will not be able to replace. 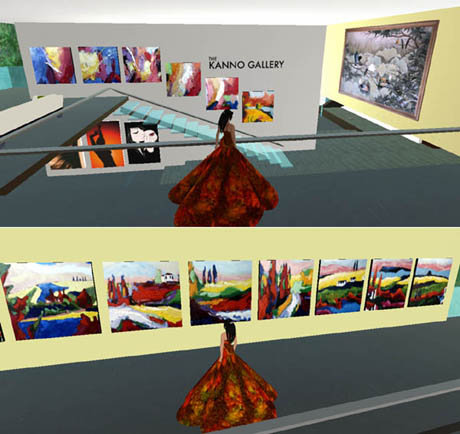 The gallery was very well-curated. I could see that the arrangement of how the paintings were hung were very tasteful. Three paintings in particular, which were grouped together, had entirely different titles, yet they seemed so much like a family to an extent that it would have been “wrong” to have hung them anywhere than next to one another.

The owner of the gallery himself (I forgot his name) had one painting of his own on the first floor. He is apparently the son of an artist and grew up in his father’s studio in New York.