The accounts I follow on Instagram reflect two passions of mine: fantasy haute couture and cute baked goods. I follow less than a hundred of accounts related to these themes and was quite shocked when I saw two recent posts about people lamenting stolen designs.

Alice Corsets (@alicecorsets) is a couture shop in the Ukraine that creates custom corsetry and gothic/fairtale costumes. They recently posted side by side their own creation of what they call the “Bleeding swan” (a feathered white costume with red crystal beading down the front that looks like blood) with a very similar design outfit posted by another person on Instagram. 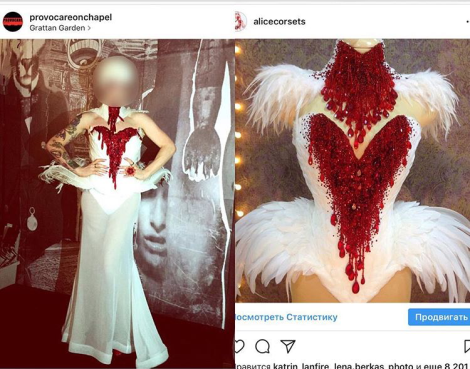 Followers of @alicecorsets commented with rage and sympathy, and during the shaming of the alleged copycat, it was discovered that the person who posted the photo (who was blamed for not attributing the design to its origin) was neither the person who commissioned nor designed the copycat costume.

In another example, one of my favorite macaron bakers, Toronto-based @mellyeatsworld posted today that her macaron designs of animals were copied by a China-based squishy toy maker (@shimeland). I was a bit skeptical about whether or not a cute animal could really be considered a copy, but when I looked at shimeland’s account, it was very clear that they were copied, especially because the little squishy toys were named “cute panda macaron” or “little chicken macaron”.

In these two examples, neither @alicecorsets nor @mellyeatsworld are large-scale commercial operations. They are independent artists who share their creative designs on Instagram. When it comes to visual design, however, there is very little protection for intellectual property, which is why copying others’ design is quite a widespread practice practically built into the world of fashion design and baking design. Search for “unicorn macaron” on Instagram or Pinterest and you will see what I mean.

In the case of two accounts mentioned above, the interesting thing was that the designers were not upset that their designs were copied, but that they were not attributed. To a certain extent these cases were similar to one of an Australian makeup artist Katina (@doyouevenblend) whose design was copied by another makeup artist duo (@realtechniques).

@doyouevenblend, left, posted this eye makeup design on Instagram long before @realtechniques did. They said they amicably resolved the issue.

If anything, sharing artistic designs on Pinterest and Instagram are fueling a lot more inspiration, copying, and reappropriation than ever before but the practice of attribution has yet to catch up with the practices of copying and/or sharing. This becomes even more tricky because the people who are sharing beautiful designs are not always the people who created them. So if Baker A ripped off Baker B’s designs, and I bought pastries from Baker B, I would not even know to attribute Baker A when I upload it to Instagram. Ironically, however, this secondhand sharing process sometimes winds up alerting the person who originally created the design, as in the cases above.

What is interesting to me is that Instagram, which was created much later than Flickr, decided to completely forego the option of letting users attach their own copyright. Flickr lets users attach a Creative Commons license to their photos, which offers a combination of features on how you want your content distributed/attributed/commercialized, etc. (However, even this is limited to the photograph itself, not the content of the photograph. So if I were to buy macarons from Melly and take a beautiful photograph, I could choose to distribute that photograph any way I want without attributing Melly.) The licensing options will not solve the problem of  people copying, but at least could create awareness and positive norms related to attribution.

Personally, I believe that in small scale, copies, are harmless. After all, art inspires art. But when companies start mass producing designs that they are copied from individual designers, I think that’s a serious ethical problem.

Dr. Wohn is an assistant professor at NJIT and director of the Social Interaction Lab (socialinteractionlab.com). Her research is in the area of Human Computer Interaction (HCI) where she studies the role of algorithms and social interactions in livestreaming, esports, gaming, and social media.